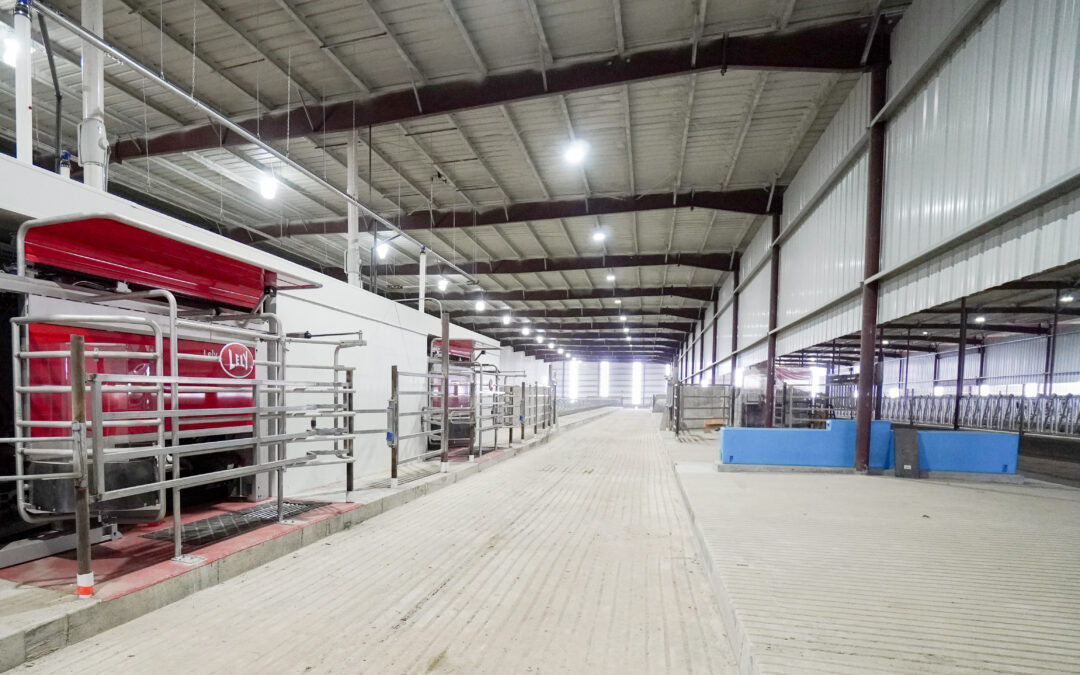 In the last 25 years, the evolution of milking equipment and practices has been one of the fastest growing technologies in the agricultural industry.

In the olden days of dairy farming, milkers sat on a stool with a pail by their side and milked each individual cow with their hands. As you can imagine, this technique was not time efficient, limited the number of cows a farmer could maintain, and called for a long rigorous day of work for the farmer. In order to keep up with the demand for milk, milking technology and mechanization had to be incorporated into the daily lives of the dairy farmer.

In 1879, Anna Baldwen, a New Jersey farmer, invented and patented the first mechanical milking machine in the United States known as the Hygienic Glove Milker. This machine included a hand pump connected to a container with rubber cups that fit all four teats of the cow. This machine continuously milked the cows, so it did not serve as the most comfortable machine, but it began the evolution of technology in the dairy industry.

Fast forward to 1895, the Thistle Vacuum Milker was invented. This milking machine consisted of a special implement called the pulsator, which guaranteed intermittent flow instead of a continuous milking action. This innovation sparked the creation of the Surge Bucket Milker by Herberr McCornack in 1922. The milker imitated a calf’s natural milking movements and proved for better sanitation and more comfort for the cow.

From the time that milking technologies emerged onto the dairy scene, there were many notable inventions that aided in further progressing the dairy industry, but the next big leap came in the 1960s. This decade introduced pipeline systems that were installed above milk stalls which allowed for multiple cows to be milked at the same time.

Then, in 1992, a prototype of the first milking robot, which many dairymen acknowledge as the most important invention of the 20th century, was introduced. These robotic milking machines would come to be called automated milking systems (AMS). Robotic milking allowed cows to be milked several times per day and helped to reduce labor costs for dairy farmers.

Since 1992, robotic milking has advanced greatly and it appears this trend is here to stay. Robotic milking is a voluntary and automated milking system that allows cows to set their own milking schedule. Robotic milking systems use robots to clean the cow’s teats, attach the milking cups, and milk the cow. The robots have the ability to identify the cow, measure her milk production, analyze the milk quality, and record data about each cow. 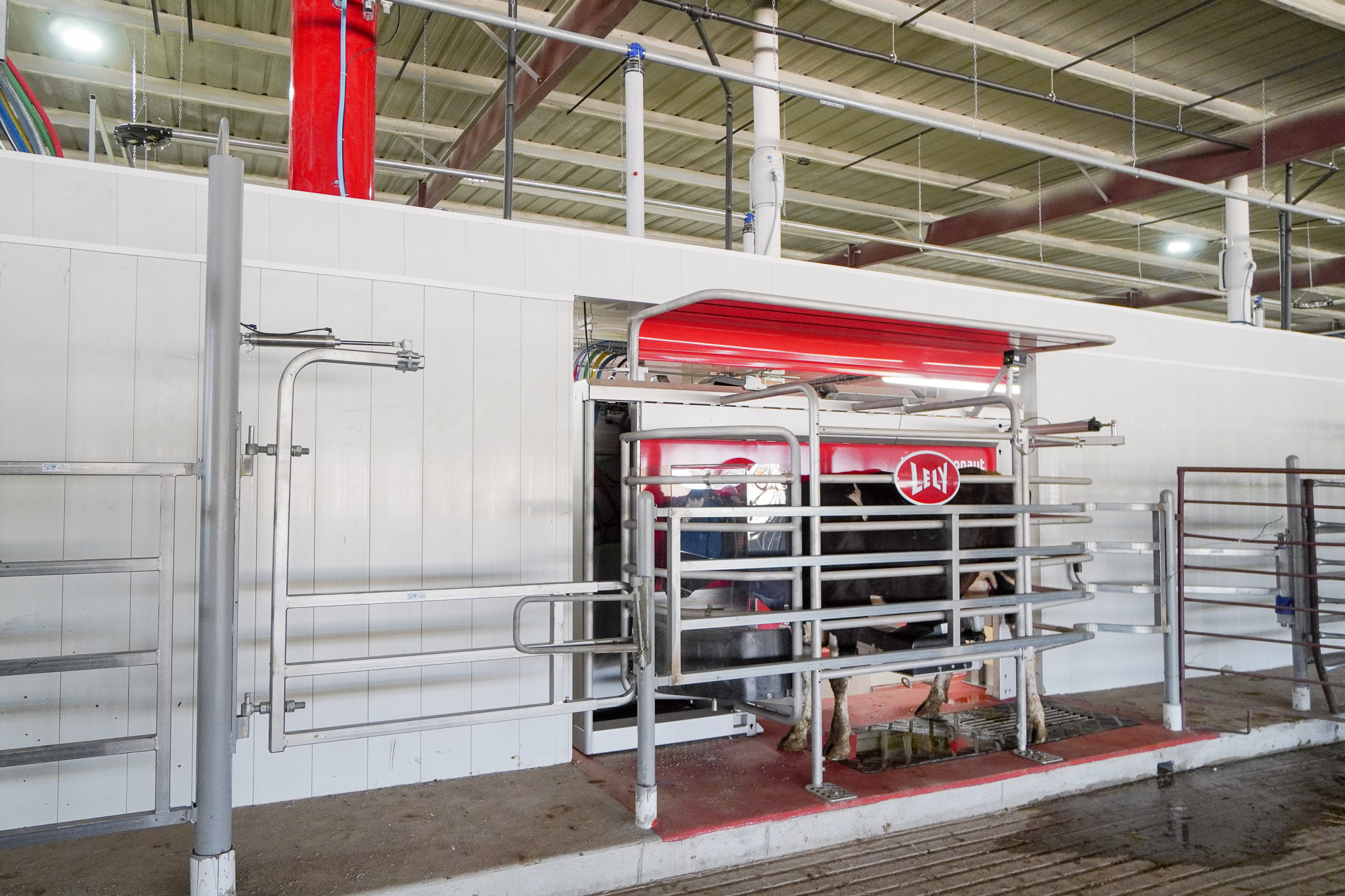 Robotic machines can even give supplements to the cows, track body weight, milk yield, body temperature, and more to assist with health and wellness. With robotic milking systems, the stress of the cow is decreased since they are able to milk voluntarily. This decrease in stress results in higher milk yields. 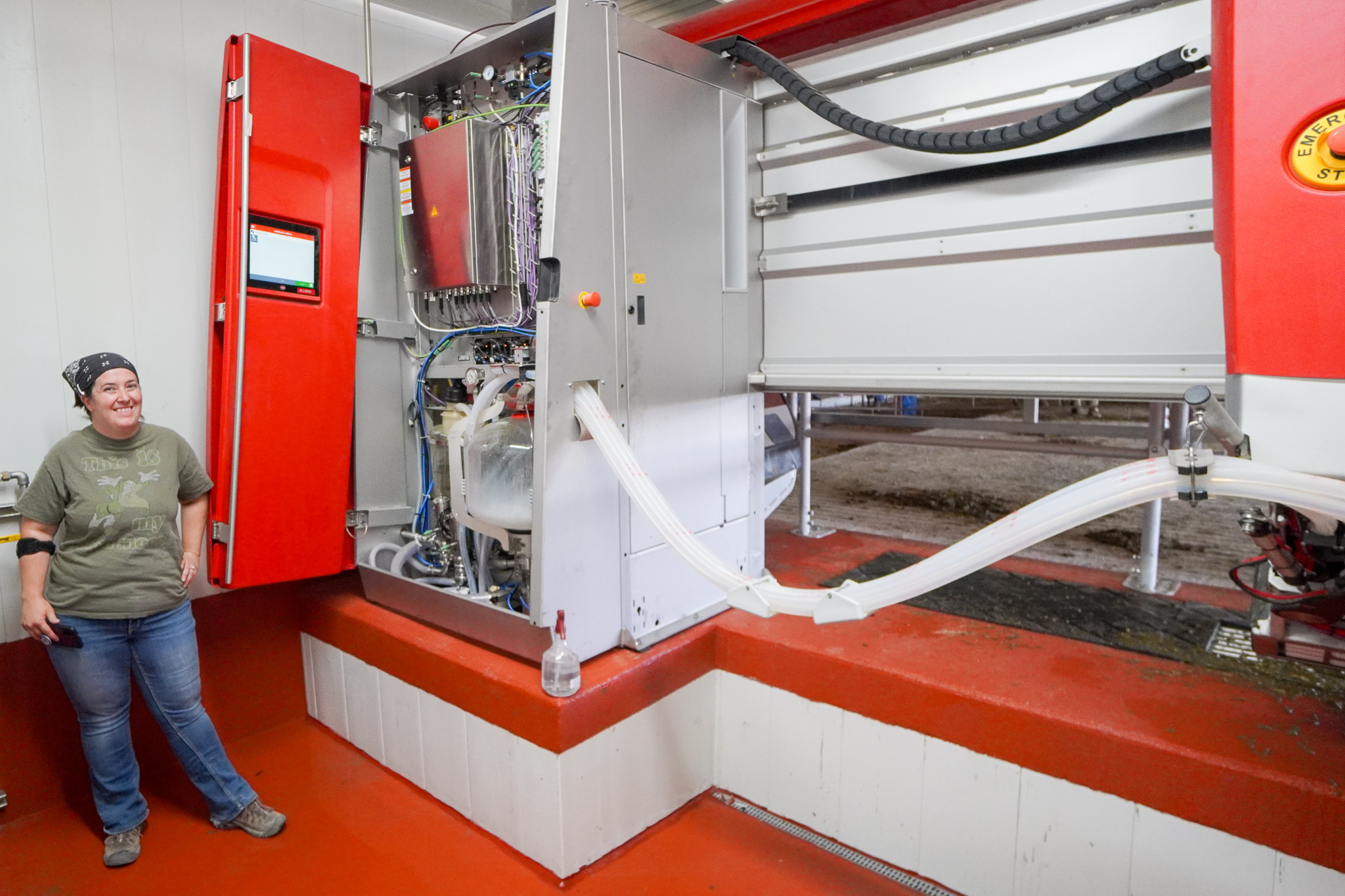 Here at Prime Metal Buildings and Components, we know a thing or two about the dairy industry and what it takes to design an innovative dairy facility to maximize milk production while keeping costs down. Prime was established in 1997 by Keith Brown and the late Bud

Sakraida. Brown owned and operated a dairy equipment business while Sakraida had spent the last 50 years designing and constructing dairies throughout the United States.

Chris Roberson, one of Prime’s Metal Building & Dairy Salesmen, has been with the company since the beginning. Roberson has witnessed firsthand the evolution of dairy technology and building design in the past 25 years in his role as a designer and salesman.

“In the early days of Prime’s introduction to the dairy industry, most dairy facilities built were based on a naturally ventilated housing concept, also known as freestall barns,” explained Roberson. “This was a result of providing better housing and more cow comfort than an open lot or pastured cows approach, which saw the animals exposed more to the natural elements.”

The term freestall refers to barns used to house dairy cows for periods of time and includes stalls where they may lie down. The bedding stalls and feed lanes are cleaned daily to maintain health and production of the cows. With this configuration, the cows are moved from the freestall barns to the milk parlors for milking.

With advancing trends and developing technology, building designs must evolve to accommodate a variety of developing technologies. According to Roberson, Low Profile Cross Ventilated (LPCV) barns, as well as tunnel ventilated barns, are gaining popularity and are successful in meeting an assortment of needs. LPCV barns and tunnel ventilated barns introduce improved air flow and provide a cooler, more regulated environment. These types of barns primarily use evaporative cooling pads or misting systems to keep the cows more comfortable, especially in warmer seasons. 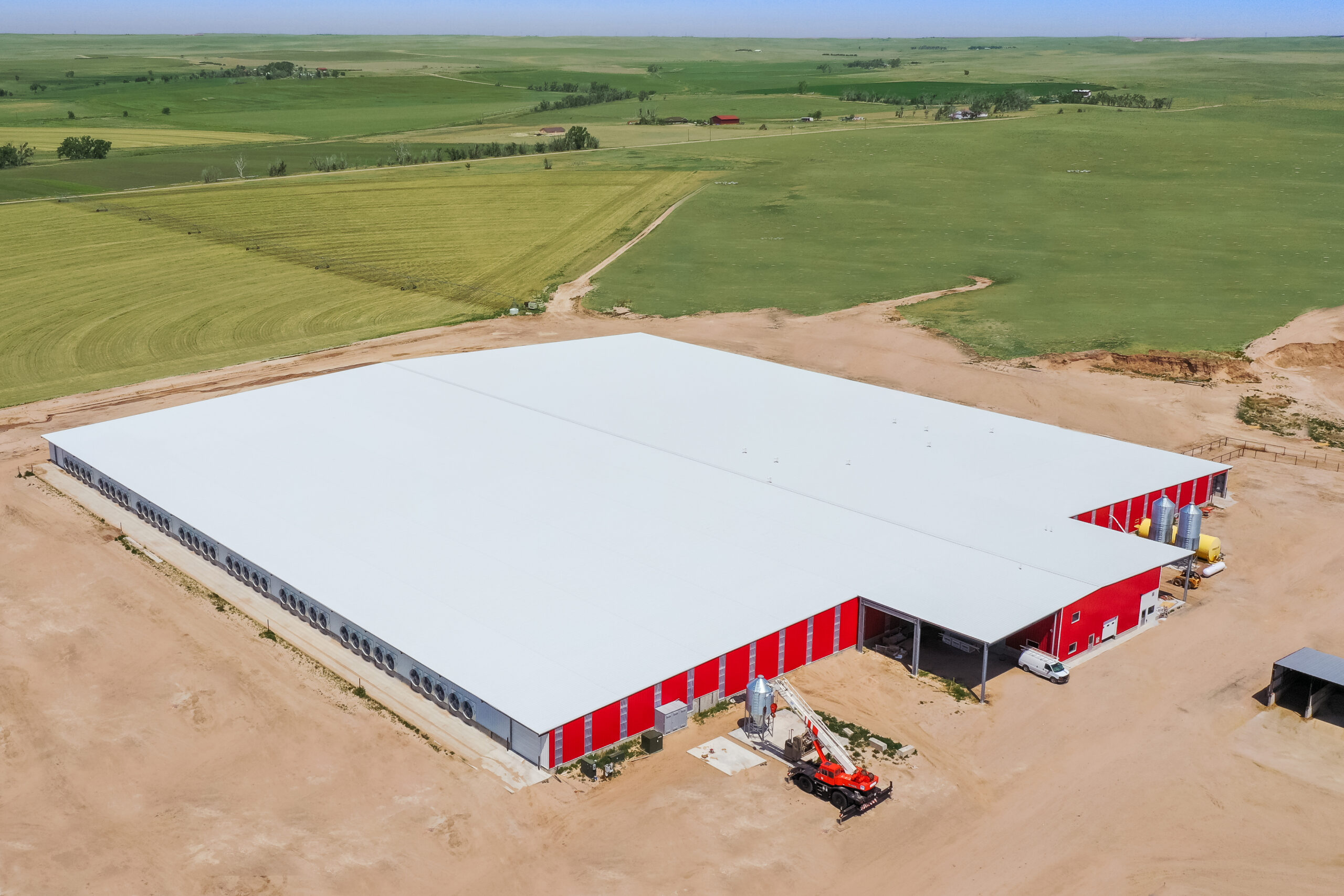 When it comes to milking parlors, the most common designs that come through Prime include parallel and rotary parlors.

The parallel parlor is based on a pit design, which evolved from the earlier tie stall concept. As the name indicates, the cows stand parallel to each other in this set up. Since the cows are standing side by side, the milk claw is placed on the cow from directly behind.

The rotary milking parlor can be thought of as a carousel ride for cows. The rotary parlor consists of a rotating circular platform with stalls for cows to walk into to be milked. Depending on the size of the rotary, the cows are typically finished milking by the time they have completed one lap. The rotary parlor has developed into an efficient way for farmers to milk their cows quickly and is a very clean and swift process.

However, with robotic milking systems, the need for a separate milking parlor is nonexistent. Robotic milking is a voluntary system which means the cow chooses when she is milked. The robots are built in the alleys of the barns where the cows live, giving the cows 24/7 access to the milking machines. Prime has seen most robotic facility designs built as an LPCV barn or tunnel ventilated barn although some facilities are choosing to utilize robotic technology in standard freestall setups.

Automation has revolutionized the dairy industry in the past 25 years. According to Roberson, U.S. milk production has grown on average 18% faster per year since 1997.

“Be it automated milking, feeding, handling or housing of dairy cows, it is an understatement to say the dairy industry has had a complete makeover in the past 50 years,” described Roberson.

Like robotic milking, feeding automation can save on labor costs and is an efficient method in reducing feed shrinkage. Additionally, the ability to feed multiple times per day has a positive impact on feed conversion ratio. A higher feed conversion ratio is the foundation for better overall health of dairy cattle and results in a higher milk yield.

Automated milking and feeding systems must be taken into consideration during the building design phase. Building designs and layouts must evolve with the industry to ensure the final product works well from the ground up.

“Prime has embraced automation just as the dairy farmer has to allow us to continue maximization of production while keeping costs down, so the dairy farmer is able to do what he does best, and that is producing milk,” states Roberson.

Prime understands the challenges that are ever present in the dairy industry, and we instill that knowledge into our building designs and layouts to continue making our customers successful. The dairy industry is not a ‘one size fits all’ business model, and Prime takes pride in having the knowledge and understanding not only of our customers, but our manufacturing responsibility as well.

“There is no better laboratory than the ‘boots on the ground’ approach for the dairy industry and listening carefully to the challenges and concerns of the dairy farmer,” described Roberson. “Competitors come and go in our industry, but we know our customers by name, and we talk to them face to face and take their concerns seriously.”

Prime stands ready, willing, and capable to continue evolving and adapting to the ever-changing winds of the dairy industry. Our goal with technology is to take a proactive, not reactive, approach. Prime stays ahead of the growth curve and we do not wait until the technology is a “must-have.”