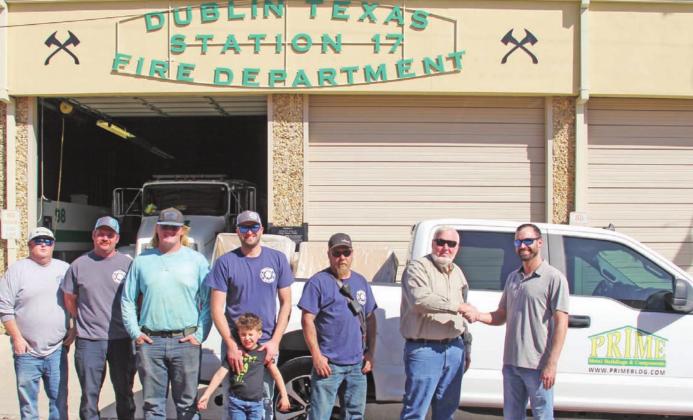 As raging wildfires struck Eastland, Erath, and surrounding counties during the week of March 17th, our local Dublin Volunteer Fire Department joined the fight on the frontlines to help defend local land and families. Conditions were against DVFD and other departments, but the support and donations from local businesses and citizens provided relief to DVFD.

From the time the fires started, DVFD Fire Chief Paul Warner and his team of volunteer firefighters were on call for multiple days, with little time to rest and eat. However, their efforts were not going dismissed by the community. An abundance of food, drinks, and donations filled the station.

Mayra Hagood, Prime’s Human Resources Associate and wife of Zach Hagood, one of Dublin’s volunteer firefighters, is still in awe of the outpouring of support shown by the community.

“It was really sweet because instantly people saw how important it is to have a volunteer fire department,” stated Hagood.

Hagood and the other fire wives spent hours at the station the night of fires organizing food and water donations. While at the station, she saw the firemen show up, grab food, and immediately get paged back out to assist with the fires.

As Hagood was getting ready to leave the station for the night, she and Chief Warner began talking about the long night ahead for the crew. Warner explained that the crew would be sleeping at the station in the conference room chairs.

After hearing that, Hagood knew that something had to be done. She decided she wanted to do something to help get the crew cots to sleep on during long nights like these. “I knew they did not have cots or beds to sleep in, but I guess I never really thought about it until now,” explained Hagood.

That weekend, Hagood started a fundraiser to purchase the cots for Dublin VFD. She was able to raise almost $500 at Lucky Vines Vineyard & Winery to cover part of the cost of the cots. When Austin Brown, Prime’s co-owner and COO learned about what Hagood was up to, he decided to purchase the six cots for the department. Hagood was able to accomplish her goal of providing cots to the DVFD and was also able to donate the money she had raised to the department.

“Prime jumped on the opportunity to donate the cots when they didn’t have to,” explained Hagood. “It’s awesome to work for a boss like Austin because it motivates you to be even more giving.”

“The guys were very excited,” said DVFD Firefighter, Zach Hagood. “It is nice to have people who care and want to donate to us.”

Brown, along with Casey Leach, general manager of purchasing and project management, delivered the cots to the DVFD station on Friday, March 25th.

“25 years ago, Prime started as a small shop in Dublin, TX. While we have expanded into other communities over the years, our heritage is right here. Prime is a committed member of the communities that we live, work, and do business in. We welcome the opportunity to support the Dublin Volunteer Fire Department and thank them for their service,” Brown said.